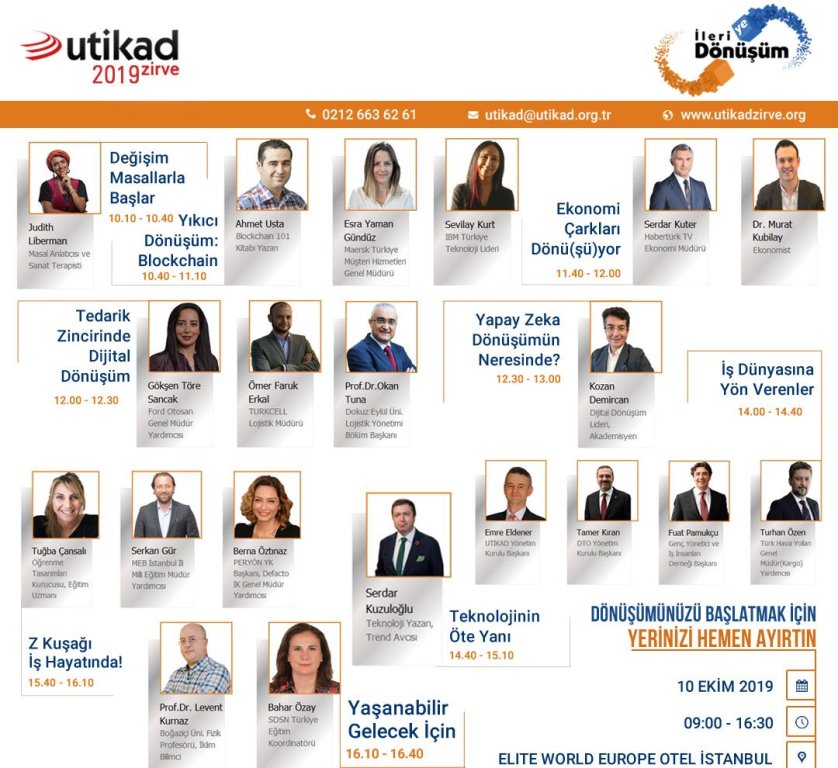 UTIKAD Summit Has Shed Light on Digital Transformation in Business

UTIKAD brought together the leaders of the industry, the competent figures of their fields, as well as business executives who are curious about digital transformation, at ‘Transformation to Future Summit’. In the sessions that continued all day, the tran

Association of International Forwarding and Logistics Service Providers (UTIKAD) held an important event that ‘sheds light on the future’ this year, as in the previous year. UTIKAD Summit, which was held on October 10, 2019 with the theme of ‘Transformation to Future’, was completed with the broad interest of the logistics and supply chain industry. Professionals who are competent in their fields from digitalization to economy and from technology to the environment and industry leaders shared their experiences and predictions with participants throughout the day.

The opening speech of the summit was delivered by Mr. İlker Aycı, Chairman of the Board of Directors and the Executive Committee of Turkish Airlines, Service Exporters’ Association President. Mr. Aycı, who told in his speech that countries were entering a period in which they were competing through supply chains, said: “The products need to be delivered to the relevant addresses in a very fast and economical way in such a period. This carries the logistics industry to a more central position in world trade. For this reason, as Service Exporters’ Association and Turkish Airlines, we have placed logistics in the center of our strategic plans.”

UTIKAD President Mr. Emre Eldener expressed his happiness for hosting an event that would shed light on the logistics industry and the business world and said: “As I have emphasized on every platform, we will probably not do most of the work we do today in five years. New business areas and ways of doing business are coming. To survive, we need to be able to manage this change and integrate it. I believe that the presentations and opinions at this summit will give an idea for the future.” 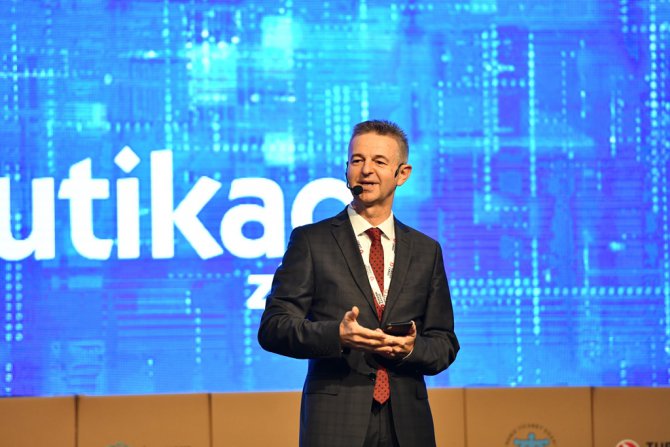 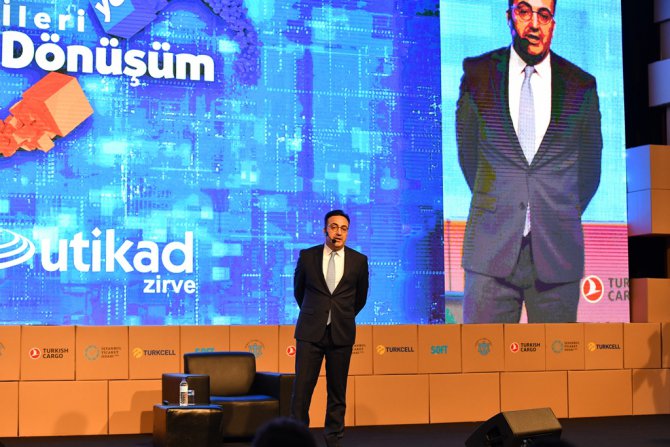 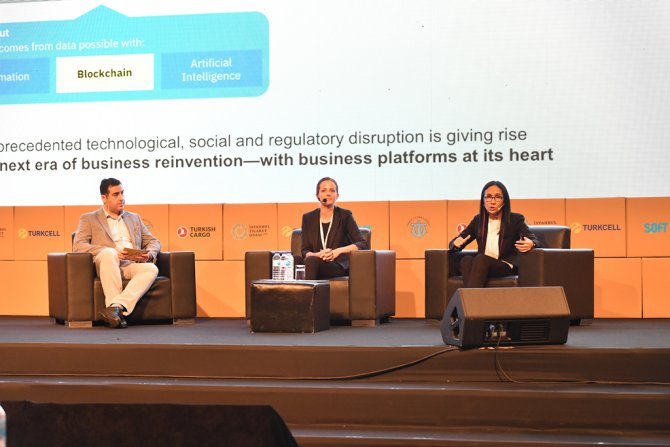 BLOCKCHAIN DRAWS COMPETITORS TOGETHER ON THE SAME PLATFORM

Following the opening speeches, the summit continued with the tales of Judith Liberman. Ms. Liberman, who emphasized the effects of fairy tales and imagination on the point where the world is today in her

speech, told that everybody should be open to sharing that would develop each other to make life sustainable.

The first panel of summit in the morning was “Disruptive Transformation: Blockchain”, which was moderated by Mr. Ahmet Usta, the author of Blockchain 101. How various disciplines such as logistics, software and finance, which are the important structures of blockchain ecosystem, were affected by developments and how the logistics industry were getting prepared for this change and transformation were discussed in this panel, in which Maersk Turkey Customer Services General  Manager Ms. Esra Yaman Gündüz and IBM Turkey Technology Leader Ms. Sevilay Kurt participated as speakers. 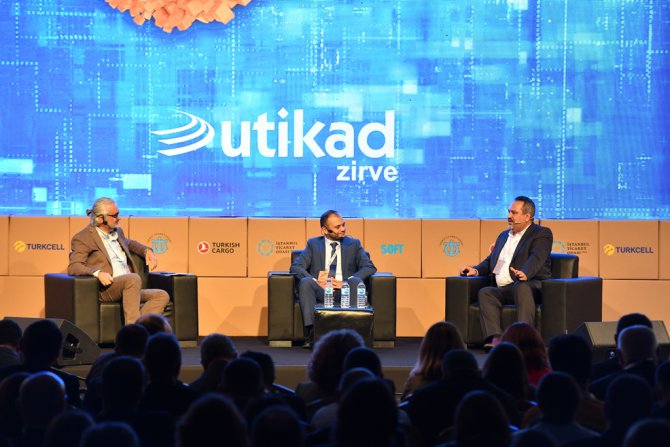 THE WORLD INDUSTRY IS STILL STABILE

Dr. Murat Kubilay, who made a presentation on the current outlook of Turkey's economy, stated that the world's manufacturing industry was still stabile, and that the biggest problem of Turkey was that it could not attract foreign investors and that the amount of its debt increased. Dr. Kubilay added that the possibility of a financial crisis in 2020 should be taken into account while making plans. 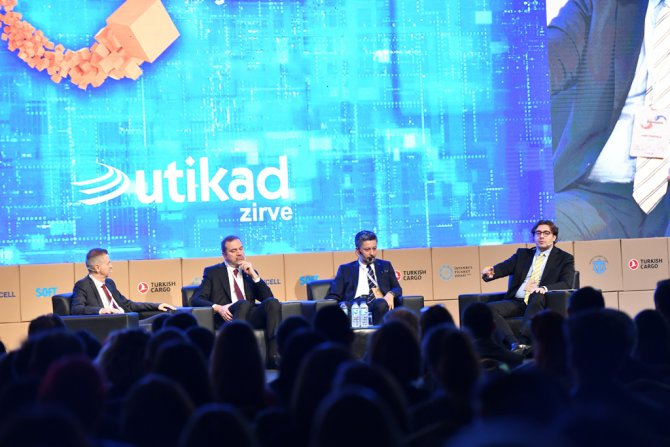 In the last session before noon, the presentation of academician Mr. Kozan Demircan emphasized the role played by artificial intelligence in transformation. Mr. Demircan said that artificial intelligence-supported blockchain technology would start the period of micro-export and that crypto-based commodity exchanges would come. Mr. Demircan said that robots in the logistics industry were expected to create a market of $ 22.4 billion by 2021.

AUTONOMOUS SHIPS HAVE STARTED TO OPERATE!

The first session of the summit held afternoon was moderated by UTIKAD President Mr. Emre Eldener. The speakers of the business world session were Mr. Tamer Kıran, Chairman of the Board of Directors of IMEAK Chamber of Shipping, Mr. Turhan Özen, Chief Cargo Officier at Turkish Airlines, and Mr. Fuat Pamukçu, Vice President of DFDS Turkey and Chairman of the Young Executive-Business Association.

UTIKAD President Mr. Emre Eldener stated that the industry changed rapidly and as UTIKAD, it is among the most important tasks to inform the industry about these changes and developments. Chairman of IMEAK DTO Mr. Tamer Kıran, who went up to the rostrum first in the session, said that those who could not make digitalization in maritime would be excluded from the play as in all sectors. Stating that the maritime industry has its share in technology and digitalization, Mr. Kıran said: “This year, unmanned autonomous ships began to carry cargo in the sea. Although it started with short and known distances at first, this was a very important development in terms of being the first step of this work because autonomous ships are equipped with artificial intelligence and IoTs, they can foresee some risks that cannot be perceived by

human beings. When we think that 75 percent of the accidents at sea are man-made, we believe that automation and artificial intelligence will greatly reduce the rate of possible accidents. It is possible to say that this situation will reduce the labor force a little.”

Mr. Turhan Özen, who said that Istanbul Airport would be the greatest of the world in terms of cargo capacity, said: “It is not enough that this new facility is the largest and the most modern one but it is also the smartest facility and this is important for us. We will call this cargo terminal Smartist. Here we will set up robotic process automation. Doing these with robots will contribute to the logistics industry in terms of speed, quality and cost. Another technology is wearable technologies; especially augmented reality glasses. Pilot studies are underway and we will start implementing them in a year.” 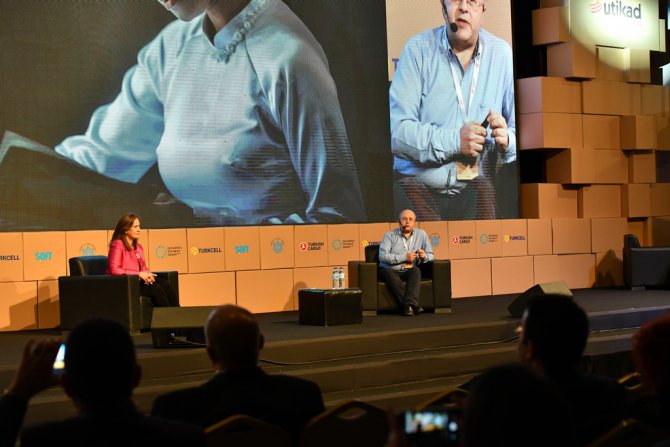 REACHING LEADERSHIP IN INNOVATION IS TRANSFORMATION TO FUTURE
The last speaker of the session, President of the Young Businesspeople and Executives Association of Turkey Mr. Fuat Pamukçu gave an example from research and recalled that the profitability of the world's top 25 companies was similar and around the average of 10 percent 30 years ago. Mr. Pamukçu stated that the profit margin was 45 percent in today’s conditions and emphasized that the ones who could not change and who were not good at their business fell behind in the list. 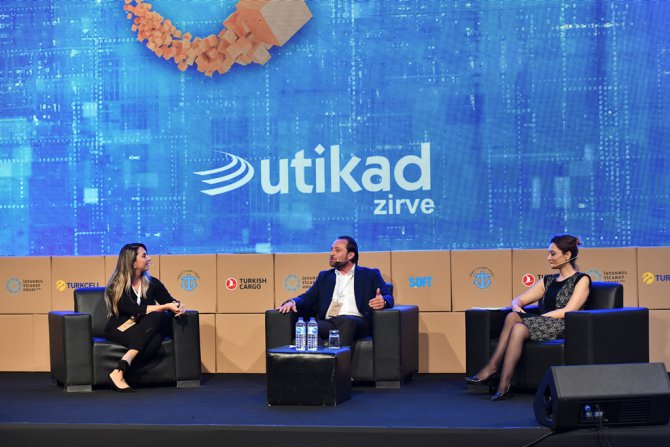 After the session “Great Business Leaders”, the summit continued with the presentation of Technology Writer Mr. Serdar Kuzuloğlu. Mr. Kuzuloğlu emphasized the added value created by digital transformation in logistics services and stated that logistics was the determining factor in the conquests in history, as well as the determinant factor in firms' prominence.

In the last sessions of Transformation to Future Summit, the Role of Generation Z in Business and Change for a Livable Future were discussed. It was emphasized in the session in which Mr. Serkan Gür, Deputy Director of Istanbul Provincial Directorate of National Education participated as a speaker that there was a significant transformation in the generation change. Mr. Serkan Gür, who mentioned ‘Protocol of School-Industry Cooperation’ in his speech, stated that they signed a cooperation protocol with UTIKAD within this framework and said: “With the contribution of UTIKAD and its members, we will graduate and employ our students who are more knowledgeable in their profession and who have international qualifications.”

Chairman of People Management Association of Turkey (PERYON) Ms. Berna Öztınaz said that 75 percent of employees in Turkey would consist of young people who were under 35 years old in 2025 and emphasized that these young people needed to be defined correctly.

The last panel of the summit was held “For a Livable Future”, in which the impact of climate change and environmental factors on the transformation of production and service industries was discussed. Boğaziçi University Faculty Member and Climate Scientist Dr. Levent Kurnaz and SDSN Turkey Training Coordinator Ms. Bahar Özay shared the Sustainable Development Goals prepared by United Nations Development Program-UNDP.

While it was stated that logistics was of critical importance in ending hunger in the world, it was also emphasized that logistics solutions were still needed in the process of production and consumption and delivering food to consumers without getting spoiled.

UTIKAD (Association of International Forwarding and Logistics Service Providers), established in 1986, represents road, air, sea, rail, combined transport and logistics service providers companies in Turkey and at international arena as the most important and active association in Turkish Logistics Industry. UTIKAD is the national representative of Turkey in FIATA (International Federation of Freight Forwarders Association) which is the largest non-governmental organization in the field of transportation and logistics in the world. Separately, UTİKAD is an observer member of European Association For Forwarding, Transport, Logistics and Customs Services (CLECAT), and founder member of ECO Logistics Providers Associations Federation (ECOLPAF).