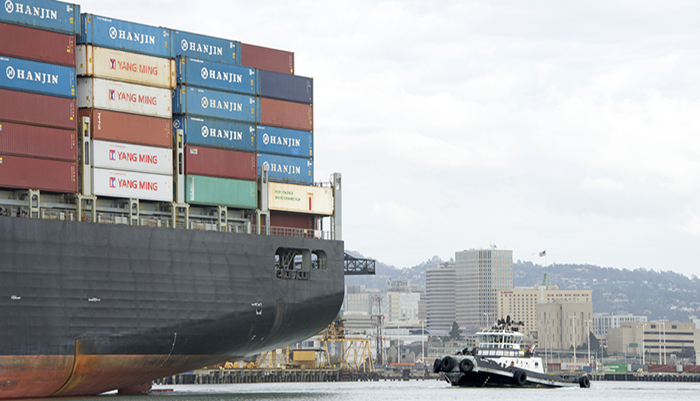 US regulator steps up pressure on ocean carriers

The US Federal Maritime Commission has stepped up its efforts to find a resolution to the congestion problems and equipment shortages affecting US container terminals and shippers.

The regulator has expanded the scope of its fact-finding mission into detention and demurrage to investigate the carriers operating in alliances and calling at Long Beach, Los Angeles and New York/New Jersey.

“The time has come to resolve the most serious impediments to port performance,” said commissioner Rebecca Dye. I’d like to thank my fellow commissioners for their support of the Supplemental Order for Fact Finding 29, as I focus the investigation on the extreme conditions in the Ports of Los Angeles, Long Beach, and New York/New Jersey. The order emphasises that I, as fact finding officer, have all enforcement options at my disposal to address the crisis that exists in our major port gateways.”

She added that the commission had a “compelling responsibility” to investigate the situation and was concerned that the practices of carriers and terminal operators may be “amplifying the negative effect of bottlenecks” at the ports.

Commissioner Dan Maffei said that the investigation into the practices at the country’s three main ports seemed to be contributing to congestion and unfairness and may violate US law.

Crisis in the supply chain

“The pandemic conditions combined with the incredible import volumes partly resulting from the pandemic have created a crisis in the supply chain,” Mr Maffei said.

“I perceive that some carriers have taken positive steps to work with other groups in the supply chain to develop more fair and efficient practices as the crisis evolved over the past weeks. However, there are reports that some carriers are threatening high charges for failure to return empty containers on time, even in cases where congestion has made it difficult or impossible to do so. I fear there are too many in the industry who may be ignoring the principles set out in the interpretive rule when it comes to levying detention and demurrage charges.”

He said there were increasing reports that delays and congestion were being exacerbated by carrier demands that a container be returned to a different location from that where it was picked up, and that it was imperative that container return policies were being implemented in a reasonable manner.

“The apparent lack of availability of containers needed to export chemical and agricultural products is concerning,” Mr Maffei said.

“One of the purposes of the Shipping Act is for the FMC to promote the growth and development of US exports and so I believe we have a responsibility to ensure that carriers do not limit the containers for US exports in a way that is inconsistent with the Shipping Act and other US laws.”

US exporters welcome the move

US exporters have welcomed the news of the expanded investigation.

“Clearly the commissioners have lost patience,” the Agriculture Transportation Coalition said in a statement.

“The carriers and terminals were poorly advised to ignore the FMC’s guidance on detention and demurrage. Commissioners are hearing from members of Congress about the export bookings being cancelled and denied. The commissioners’ actions are consistent with their obligation to enforce the Shipping Act and the interests of the US economy.”

But the World Shipping Council, which represent the major container lines, said that while it agreed that regulated parties should follow the Shipping Act, the commission needed to see the full picture.

“Right now, we have global demand for containerised shipping beyond anything that anyone could predict,” WSC chief executive John Butler said in an email to Lloyd’s List.

“The pandemic has severely disrupted patterns of demand and supply all over the globe, putting extreme stress on every part of the system.”

He added that there were “compounding factors”, including shippers holding full containers at distribution centres and making “phantom” bookings.

“The fact is that there is a finite amount of equipment available,” he said.

“The faster that equipment is loaded, moved, emptied, and returned, the better it is for everyone. Unfortunately for those who offer simplistic solutions, the system is more complicated than that, and it will take willingness to collaborate and think in new ways from everyone in the supply chain to resolve the current situation.”

Lloyd’s Loading List reported last week that the British International Freight  Association (BIFA) has joined The International Federation of Freight Forwarders Associations (FIATA) in calling for governments to support the key considerations laid out by the US Federal Maritime Commission in its Final Rule on Demurrage and Detention and investigate the reasonableness of these practices in the container shipping sector. BIFA said that freight forwarders and the shippers they work for are reeling from unjust demurrage fees linked to congestion in ports around the world.

BIFA’s director general, Robert Keen, commented: “They should not be penalised by demurrage and detention practices when circumstances are such that they cannot retrieve containers from, or return containers to, marine terminals because, under those circumstances, the charges cannot serve their incentive function.”

History of ‘unjust and unfair practices’

According to the UK forwarder body, the FMC’s pronouncement came after six years of investigation with all participants in the supply chain and which concluded that there had most likely been “a long history of unjust and unfair demurrage and detention practices.”

BIFA underlined that while there are country and port-related variances, the FMC findings apply globally, as demurrage and detention is a common and widespread topic of contention.

Keen added: “If the FMC has identified demurrage and detention practices that are likely to be considered as unjust for the USA, these practices are also unjust and unreasonable for the rest of the world. It is wrong for container shipping lines not to respect the interpretative rule introduced by the FMC in May that sought to govern conflicts on the issue of demurrage and detention fees.

“Governments must, therefore, have greater scrutiny over demurrage and detention practices to ensure that they are considerate and reasonable for the good of their own economies. It is crucial to ensure fluidity and good function of the supply chain, in unprecedented times as illustrated by COVID-19 and the chaotic state of international container shipping at present.”

BIFA, along with FIATA, is encouraging policymakers to consider the FMC’s non-exclusive list of factors for consideration when assessing the reasonableness of demurrage and detention fees.

The statement underlined that such guidance “will promote fluidity in freight delivery systems by ensuring that demurrage and detention serve their purpose of incentivising speedy cargo delivery; and that the interpretive rule will also mitigate confusion, reduce and streamline disputes, and enhance competition and innovation in business operations and policies.”

BIFA is also urging decision makers “to ensure a level playing field for all actors in the supply chain of the reasonableness of demurrage and detention charges.” This includes consideration of the extent to which demurrage and detention practices are serving their intended purposes as financial incentives to promote freight fluidity.

The organisation concluded: “All international maritime supply chain stakeholders should also benefit from transparent, consistent and reasonable demurrage and detention practices that improve fluidity in global ports and terminals for the benefit of fair, reasonable and ethical interactions between stakeholders in the maritime supply chain. The FMC rule is, therefore, intended to stop unreasonable and unjust practices to which shippers and freight forwarders alike have been exposed to for years.”